Your are in: Home / Blog / William Stott of Oldham: Life in Paris 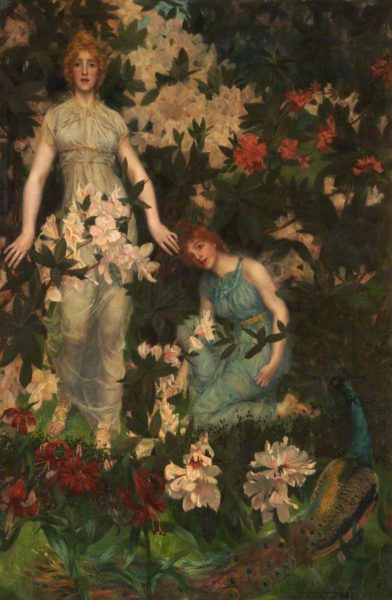 Hide and Seek in the Garden of Epicurus, Leontium and Ternissa by William Stott of Oldham

The next part of this series of blogs by research volunteer Alison Jones focuses on Stott’s life in Paris.

My Bohemian Days in Paris by Julius M Price (published 1913) gives a small if discreet insight into William’s life as an art student in Paris. Here he describes meeting William Stott for the first time:

‘I suddenly heard myself addressed in English by a burly young fellow who was making a drawing close by —– What’s your name? Mine is Stott – William Stott of Oldham.’

He describes a little of the life he and William led:

‘We afterwards had a stroll round, talking of painting, and ending by discovering we had some mutual friends in England —- we dined together in a little restaurant in the Rue St Benoit crowded with students and where Stott seemed to know everybody from the patron downwards. The dinner was a very decent one considering it cost only 1.25 vin compris, for Stott like myself was not overburdened with wealth – in fact he explained to me that he had to be pretty careful when it was getting towards the end of the month, besides which he said there were other things more amusing than food to spend money on.’

‘When work was over, or if as not infrequently happened after dejeuner, the weather was particularly warm Stott and I would have a stroll, and perhaps make our way across the river to the Louvre or else to the Champs Elysees, and watch the gay traffic, and discuss what we would do with our wealth if we ever became famous and rich in consequence’

‘At ten Stott and I used to knock off for a little while and go across the road to the marchand de vie for gouter, which consisted of a glass of white wine and a croissant.’

The writer gives some insight to William as a developing artist, which again is interesting in light of later critiques of his work.

‘I had been in the antique about three months when I was passed for the atelier —– Stott did not get in until afterwards , but he looked on himself as a landscape painter so was not particularly concerned about it – as figure painting with him would be but an accessary (sic) to his Art.’

Eventually Price decides to move to Montmartre but that:

‘Stott had decided to remain in his beloved Quartier when in Paris, as he was away a good deal painting in Brittany and elsewhere.’

By Alison Jones, Research Volunteer with quotes from Roger Brown’s William Stott of Oldham: A Comet Rushing to the Sun.