Your are in: Home / News / Whistler and Scandal: William Stott of Oldham

Alison Jones investigates scandal and the artist’s link to Whistler in this latest blog about William Stott of Oldham.

William became part of  Whistler’s circle. In 1886  Stott published a letter in support of Whistler’s art and  Whistler and Maud visited William and Christina in Ravenglass, where Stott did a pastel of Maud.

In the summer of 1887 William began painting ‘The Birth of Venus’, using Maud Franklin, Whistler’s mistress, as a model. The press response to the painting  and the following scandal must have led to gossip in Oldham and amongst the men on the ‘Exchange’ and possibly in Scotland where Christina’s family came from.

Critics savaged Stott’s ‘Birth of Venus’ when it debuted at the Royal Society of Artists 1887 Winter exhibition. Whistler was said to be shocked by the unspoken assumption that she had been intimate with Stott.

Many reviews poked fun at the painting eg  ‘the astonished goddess – her perfectly dry, tousled hair – as to say “Where am I in this undressed and uncomfortable position—‘ Another paper described Venus as a ‘distraught barmaid.’

The fallout from the painting of Venus and comments by Whistler about William’s relationship with Maud, culminated in the fight with Whistler at the Hogarth Club on the 3.1.1889. Whistler had a much better address book and quickly circulated his version of events, which ridiculed William Stott and gave himself the better of the encounter claiming he kicked William after William called Whistler a liar and a coward.

The affair was reported widely but discreetly in the press and with humour. It is highly likely that Christina, the wider family on both sides and the society in which they moved knew about the fight, the gossip and the response to the painting of Venus. 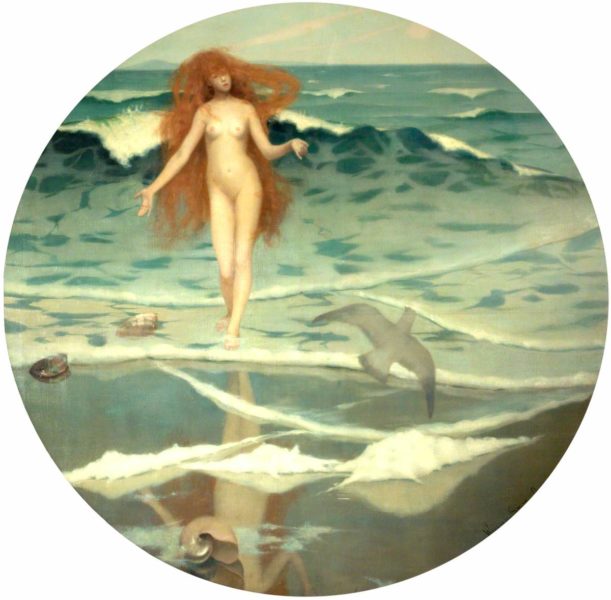 Venus Born of the Sea Foam by William Stott of Oldham