Your are in: Home / News / Object in Focus for VE Day anniversary

Today marks the 75th anniversary of VE Day, the end of the Second World War in Europe. 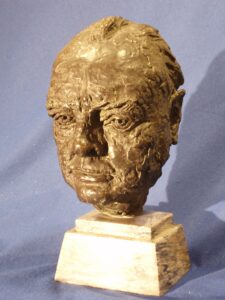 To join the commemorations, we have chosen one object from our collections to look again at the links between Winston Churchill and Oldham. Our Object in Focus is a Bust of Winston Churchill by Jacob Epstein created in 1947.

Winston Churchill first visited Oldham in 1899 as a young man at the very start of his political career. His last visit to the town was in the summer of 1945, campaigning in a general election as the prime minister who had led his country to Victory in Europe. 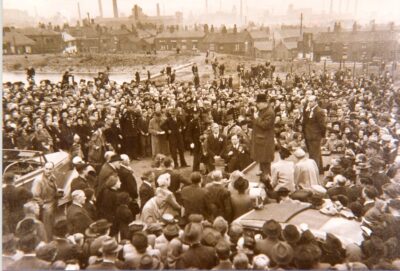 The long political career of Winston Churchill began in Oldham. He was a losing candidate in the 1899 Oldham by-election but returned in 1900 to win the seat at a general election. He was elected to serve as a Conservative MP but switched parties to join the Liberals in 1904, causing some ill-feeling in the town. For this reason Churchill chose to stand elsewhere, in neighbouring Manchester, when the next general election was called. 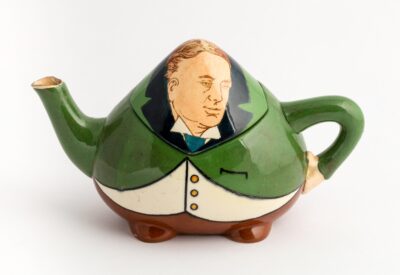 Throughout his long career Churchill maintained some links with Oldham. His portrait was on display in the town’s art gallery for one thing. And Oldham Museum later added a souvenir Churchill teapot to the collections as his celebrity grew.

When Churchill became prime minister in the early stages of the Second World War the town of Oldham was quick to cement those links by offering him the Freedom of the Borough. In writing to acknowledge the honour Churchill recalled the town with fondness, especially ‘the bright eyes and warm hearts of its people.’ 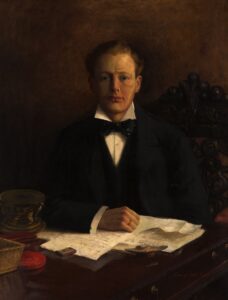 Toasted as a Hero

On VE Day Churchill was toasted as a hero throughout the country. And in Oldham he was given a friendly enough welcome the following month on a campaign visit for the general election. But despite all of this, Oldhamers were not prepared to give him their vote in 1945. They looked to a different leader and a new government to ‘win the peace.’ Churchill never officially returned to receive the award of Freeman of the Borough of Oldham.

In 1947 the town acquired this impressive bust of Winston Churchill that captures him as the iconic wartime leader. He sat for the portrait in the winter of 1946 and the sculptor made an edition of at least 10 casts of this bust. Today other casts can be found at the Imperial War Museum, at Churchill College, Cambridge and there is even one in the Oval Office of the Whitehouse. It seems fitting that there is also one in Oldham, where Churchill’s career began.