Your are in: Home / Blog / The Sound of Peace is not Silence

The Sound of Peace is not Silence

Patrick Bell describes his visit to our latest exhibition Sounds Like Her.

Through MET tram toot and high heel clop, pelican crossing beep and pneumatic drill judder, steel shutter scrape and a ‘got any spare change mate?’ followed by a mumbled apology;

…..I made my way to Gallery Oldham, searching for silence, art, and peace.

As I walked up the stairs towards the exhibition space, I contemplated my journey. The modern world is full of noise – a 10 minute trip is enough to drive you mad. All the sounds are thrown together in a deafening cacophony. It’s no wonder people search for peace of mind in silence through meditation, reading and other quiet activities. Hopefully – I thought – I can find a similar tranquillity at the Gallery Oldham.

The current exhibition: Sounds Like Her – Gender, Sound Art & Sonic Cultures brings together seven women artists from diverse backgrounds, each exploring sound as a medium or subject. It wasn’t exactly what I’d been hoping for but it did sound interesting. With the outside world still ringing in my ears, I decided to look around. 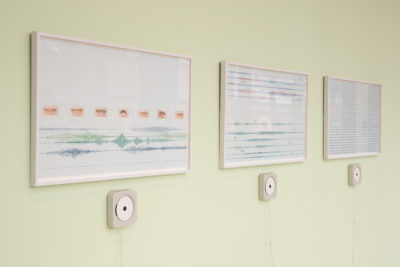 I began at Mother Tongue by Magda Starwarska-Beavan which explores the sound development of her son, from the sound of his first cry at birth to the words and sentences he was forming at three years old. As I listened to the first sudden wail, I jerked back, the sound piercing my ear sharply. Rubbing my zapped temples, I moved tentatively onto the second stage, ready for another assault. This time, the sound of the child was softer, less a wail and more a gurgle. By the final stage, the child – then aged three – had gained a huge vocabulary, yelling each word joyfully at their parent’s request. You could feel the child’s excitement and the Mother’s amusement through the speakers. It was a beautiful, tender thing; an almost peaceful thing. And by the time I moved onto the next work of art my headache had slightly receded. 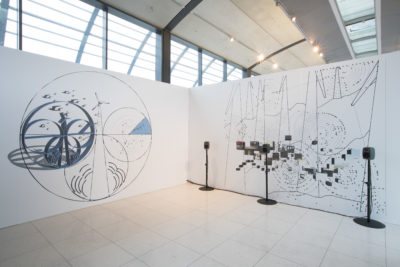 The second piece Hybrid Soundscapes I, II, III & IV by Linda O’Keeffe explored the impact of renewable technologies on the sonic environments of urban and rural spaces. It combined four different locations from around the globe that feature wind turbines and hydroelectric power stations. To experience it, I stood in the centre of a small square room which had a speaker in each corner. The soundscape began.

Now I was eager to see what else the exhibition had to offer. Devotional Series by Sonia Boyce is an ever-growing archive-based project. It includes wallpaper featuring the names of 200 black British females in the music industry. It’s accompanied by signposts bearing the image of black singers on magazines from different decades. I spied many names I knew, from Shirley Bassey to Jocelyn Brown – all brilliant artists. Beside them – signposts, a reminder of the ongoing battle for equality. These signs reminded me of crowds converging, screaming for their rights for the establishment to hear.

Contrary to my initial desire for silence, I’d found at this exhibition a different idea of sound. One that lent new meaning to what I’d previously considered ‘noise’ – which needed to be silenced for clear thought. Within the child learning its first words, the continual rotation of renewable energy machines, the power of black female singers, I had found a sense of calm. My headache had gone. If you listen with the right ear, there’s a pattern and a beauty in all sounds. The sound of peace is not silence, it’s voices, singing, music and laughter – all the sounds life makes in jubilation of its living.

Back outside, I walked across town, listening. Buses wheezed, starlings sang and leaves rustled, builders shouted, glasses clinked and cars went swishing by, small dogs yapped and a group of school kids laughed. All this noise was the rhythm of living -the greatest of all symphonies. The sound of peace is not silence.