Your are in: Home / News / The Map in the Newsagents

The Map in the Newsagents

A little-known painting by Helen Bradley is the latest addition to our ‘Peace and Plenty’ exhibition. Helen Bradley’s painting ‘It was always sad…’ is a fascinating view of Oldham during the First World War. Intriguingly the focal point of the picture is a map in a newsagent’s window.

Helen Bradley is rightly remembered for her paintings of Oldham, Blackpool and Manchester in the Edwardian period; naïve images recalling events from her own childhood. Born in Lees in 1900, Helen Layfield’s own childhood was over by the outbreak of the war in 1914. Known as Nellie to the family, her formal education had come to an end by this time and in spite of dreams of attending art school she spent much of the war working for her father, a smallwares dealer.

For Nellie, as for many young women in the town, the war years were a watershed, a period of her life that was to be rarely recorded in her paintings. An important exception is this painting which captures a scene on Lees Road in 1916. It shows a corporation tram passing along the road, lined by shops. The principal focus is the shop of the newsagent, J. Fitton, in whose window is displayed a map. Four people stand in front of the window looking at it. In an accompanying text Helen explains the significance of the image:

It was always sad to see the little red Flags on the Map in the newsagents shop in Lees Road. I always got off the tram there so that I could see how near to Paris the war had got and as I looked each week it seemed as though the war would never end. Life was very hard for all of us. There was no time now for holidays, it was always work! and the year was 1916. 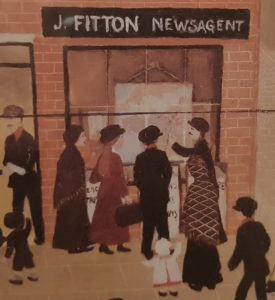 A detail from the painting

From the very outset of the war there was a demand for maps from a public keen to understand the conflict. Commercial map publishers were quick to respond and within weeks of war being declared, well-known firms such as Bartholomew’s and George Philip were selling maps of Western Europe.

It is not possible to identify precisely the map featured in the shop window but in Helen Bradbury’s memory it was the flags that were to be particularly recalled, identifying places mentioned from military reports published in the newspapers, and which were presumably pinned on to the map by the shopkeeper. The year, of course, is also not without interest as the summer of 1916 saw the opening of the long and bloody Battle of the Somme, an area of France that became of considerable interest to Oldhamers when it became known that local men were involved in the fighting. People’s interest in the geography of France and Belgium was understandably far greater when they had relatives fighting in those countries.

Welcoming the inclusion of the painting in the exhibition, Terry Wyke, one of the co-curators, pointed out that ‘it was in many ways an unusual work by Helen Bradley whose childlike images will be familiar to many Oldhamers, providing as it does an unexpected insight into the ways in which the war was followed and understood by ordinary people in the town’.