Your are in: Home / Blog / Stott: Marriage to Christina

Follow a series of blogs about William Stott of Oldham linked to our current exhibition and written by research volunteer, Alison Jones. 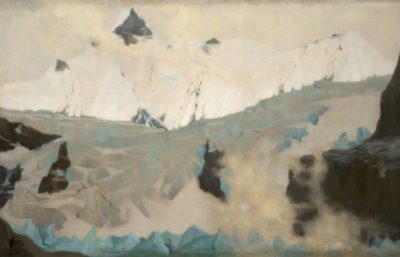 The White Mountain by William Stott of Oldham

William Stott married Christina Mary Bradbury at Shaw Church on the 1st of June 1882.  He was 24 and she was 21. Her father had been a doctor, Beckett Bradbury (Deceased).  William Stott gave his profession as Artist. Christina Stott may have met William because his family were patients of her Uncle’s medical practice at Bottom –o- the Moor .  Her Uncle, Alexander Thom Thomson, was also very influential in the establishment of Oldham Royal Infirmary and it is possible that there was a social link.

Christina’s Father (Beckett Bradbury) was born in Saddleworth. on the 3.10.1823 and baptised in The Parochial Chapelry of Saddleworth. His parents were John and Mary Bradbury, of Bentfield, Clothier.

In 1841 Beckett Bradbury was 15 and lived with The Thom family in Dobcross. as an apprentice, he later went on to qualify as a doctor in Edinburgh. Following the wedding William and Christina travelled to Scotland to stay with TM Dow and then onto stay with John Forbes White’s family. JF White bought ‘The Ferryman’ and then commissioned William Stott to paint his daughter Alice. William and Christina returned from Scotland to Ravenglass.

Christina and William moved between a cottage at Ravenglass and No4 Passage du Lac, The Rue de Vaugirard in Paris for the early part of their married life until they leased Adelaide Road in 1885. Millie Dow Stott was born in Paris in August 1883.

Christina may have spent much of her time at Ravenglass, and that is where she was when news of William’s death reached her and it is where they are both buried. It is likely that Christina’s mother lived with them.