Your are in: Home / Blog / Songs and Ballads of Peterloo: Talk by Dr Alison Morgan

Songs and Ballads of Peterloo: Talk by Dr Alison Morgan 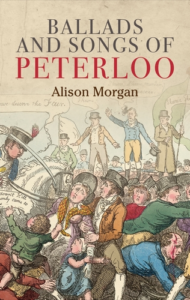 Don’t miss Dr Alison Morgan fascinating talk about songs and ballads linked to Peterloo based on her new book at Gallery Oldham on 24th July 2019 at 1pm.

Dr Alison Morgan’s book, Ballads and Songs of Peterloo, is the first to gather more than 70 contemporary songs and poems about the massacre in a single collection. She scoured online and physical archives to gather the poems after being inspired by Romantic poet Percy Bysshe Shelley’s famously passionate response to the massacre, The Masque of Anarchy – a poem so radical it remained unpublished until after his death. Through these poems and ballads we hear the authentic voice of the people. They were written very quickly, in the immediate aftermath of Peterloo, and they capture a real sense of outrage, of grief – and of revolutionary zeal for change. They would have been shared in print and also through being sung in bars and public houses, as a challenge to the official version of the day and to inspire men and women to keep up the struggle for electoral reform.

Alison is currently ‘on tour’ around the North West delivering talks on her research and on 24th July she will be at Gallery Oldham. The talk comprises information about the role of song both at Peterloo and in the immediate aftermath, when many largely unknown balladeers wrote poems and songs as a way of marking the events of 16th August 1819. Alison has been working with two groups of musicians, both of whom have brought some of the songs to life and some of these songs will be played to accompany the talk. The words echo down the centuries, speaking to us of the horrors of the time in texts that cannot be ignored – and they are still relevant today, when we see the ways in which political discourse is being changed and shaped, the ways in which people are protesting – this isn’t just about an event that happened 200 years ago, it’s about the continued fight for our democratic rights.