Your are in: Home / Blog / Season’s Best at Gallery Oldham

In this month’s visit with the Art Galleries and Museums group, comprised of service users within the community services and social groups from Henshaws, we visited Gallery Oldham for an audio described talk and tour of their Season’s Best exhibition.

This charming collection combines elements of art, social history and natural history to tell the story of the seasons during the ever-turning wheel of the year. Curator Sean Baggaley presented our talk, detailing certain pieces from each season, with audio description provided by the wonderful Anne Hornsby of Mind’s Eye Description Services.

All four seasons are depicted around the exhibition space, with a cross-shaped wall in the centre of the room helping to divide the seasons. This also creates a backdrop and splash of colour that gives a simple visual representation of that particular season; cream for Spring, yellow for Summer, orange for Autumn and silvery off-white for Winter. Explorer bags are hung at the entrance, for those wishing to partake in an interactive experience, complete with magnifiers and reading books! 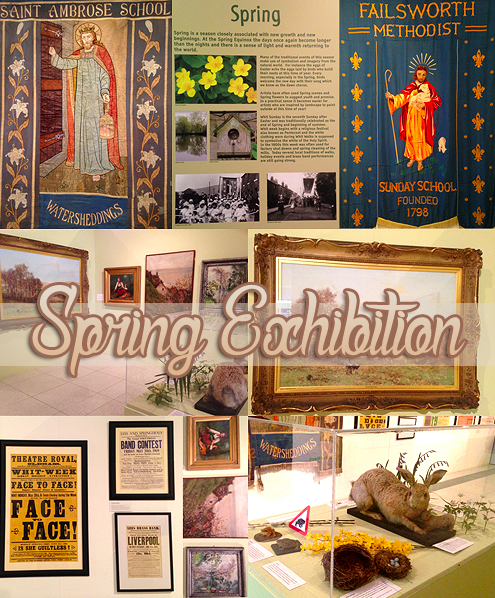 We start the journey at Spring, which incorporates a palette of earthy tones. A selection of flowers, including daffodils and daisies, leaves, bird nests, frogs and stuffed rabbits showcase the new growth and new beginnings of the natural world during this time. Whit Walk banners adorn the walls, one from Saint Ambrose School and the other of Failsworth Methodist Sunday School, and these were described to the group in great detail with a postcard of the Saint Ambrose banner being passed around for those with some remaining vision; helping us to appreciate just how intricate the stitching truly is. Various posters depict Springtime events, including brass band performances, and framed landscapes tell the story of blooming plants and an awakening scenery. The Dawn Chorus provides a multi-sensory element, with large Spring-related quotes emblazoned between the framed pieces. 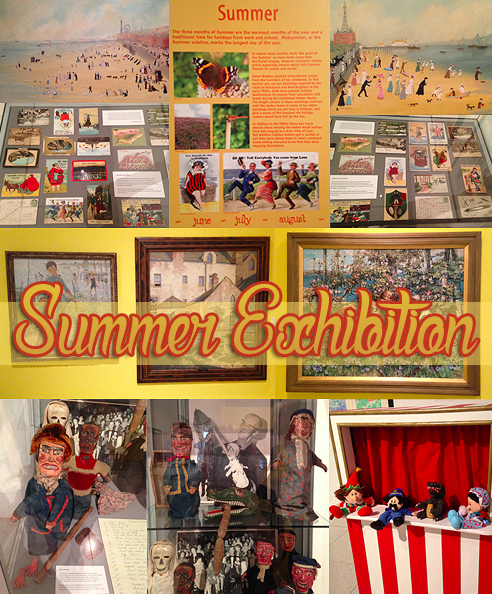 “A dripping June sets all in tune”
Summer provides a bright pop of yellow to the next exhibits; where Punch and Judy is the main attraction! Original puppets and written script directions are displayed, alongside a modern remake of the classic striped booth containing newer, softer puppets for visitors to create their own live-action show! Postcards that were sent to and from Blackpool to Oldham are presented in their own display case, and an enlarged photocopy was passed around the group of, one in particular, of a sunbathing lady declaring that you “daren’t do this in Oldham!” For those using the explorer bags, a postbox can be spotted in this area presenting the opportunity to decorate and send off your own summer postcard – a really nice touch, I thought!
The paintings in this area mainly focus on people during summer, rather than the landscape itself as previously seen in the Spring area. Two Helen Bradley paintings in particular, “New Brighton” and “A Summer Afternoon on the Sands of Blackpool”, were audio described detailing the colours, imagery and recurring characters often seen in Bradley’s works – such as Miss Carter wearing pink, as always! Posters advertise discounted trips away, raft races, horse shows, circus events, and a flower and vegetable show with large, colourful lettering and lined illustrations. 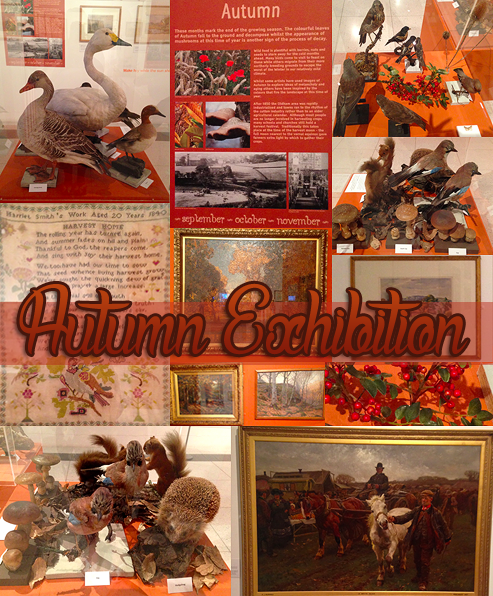 “Autumn; the year’s last, loveliest smile”
“A season of mists and mellow fruitfulness”


Autumn provides a more reddish burnt-orange tone on the feature wall, and a visual movie display captures falling Maple Seeds whirling like little helicopters! Stuffed Swans, Geese, Jays, Moths, Bees, Squirrels and Hedgehogs alongside a cornucopia of berries, leaves and mushrooms canvas nature’s inhabitants during this season. “White Slave” by James Richardson was audio described to the group recounting a brown, muddy palette and market scene of a beautiful white horse being sold. A hand-stitched sampler by Harriet Smith, from 1840, integrates the themes of religious poetry and of harvest festival. Various framed artworks return to landscaped sceneries, depicting the turning of the leaves to the beautiful array of oranges, reds and browns we witness in the Autumn months. 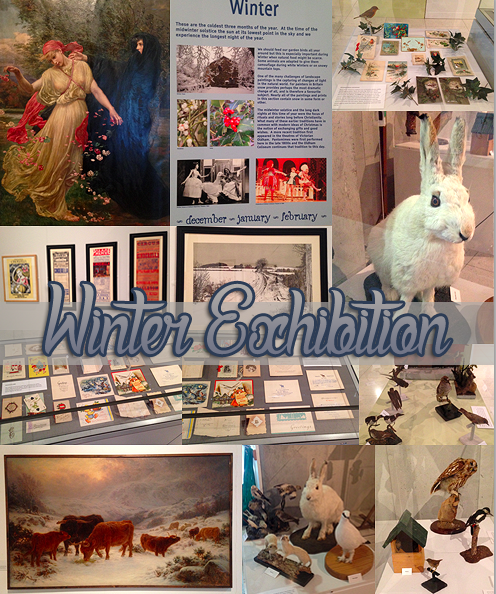 “Frost on the shortest day bodes a bad winter”
“If February gives much snow a fine summer it doth foreshow”
The group reseated in the Winter area to end the exhibition and the annual year. In this area a selection of Christmas cards fill a glass display case, rather than holiday postcards, to reflect the history of wishing a happy holiday to friends and loved ones; with both vintage and modern designs. As the season of the Pantomime, varying posters of Cinderella productions were described to us. Stuffed animals such as Weasels and Hares, birds including Robins and Owls and Holly and Ivy paint the season of Winter perfectly. Information on bird migration and how to help feed birds effectively during the Winter months is also provided.
“The First Touch of Winter, Summer Fades Away”, an oil on canvas by Valentine Prinsep, painted in 1897 in a Pre-Raphaelite style prevalent of that time, was the audio described art work from this area. Two women represent Summer and Winter, respectively, with Winter touching Summer resulting in her death as petals fall and the trees darken. Again, a postcard was provided and handed around to the group for those who could pick out the details to appreciate this beautiful piece.
After the audio described talk and tour had finished, there was a touch and handling element of Summer items to conclude our visit. Various shells that the Curator had collected, puppets from Punch and Judy complete with well-used sausages from the 1960’s productions, and a horn from a 1920’s ice cream truck that used to visit Oldham and the surrounding markets were passed around the group.
Season’s Best has cemented its place as one of my favourite exhibitions, along with Something Blue: Wedding Fashions 1914 – 2014, that I’ve had the pleasure of exploring with the group so far. The aforementioned touching and handling session was something I thoroughly appreciated and enjoyed, and the added sensory element of the Dawn chorus was also a nice touch!
Thank you to Mary Gifford, Anne Hornsby, Sean Baggaley and Mary Tantrum for a truly enchanting and splendid visit to Gallery Oldham!
Written by Kimberley Burrows