Your are in: Home / Blog / Sculpting Stories and the Geometry of Fear

Sculpting Stories and the Geometry of Fear

Our newest blog post is by Phil, one of our fantastic volunteers. His post focuses on the Sculpting Stories exhibition and some of its featured artists, also know collectively as the ‘Geometry of Fear.’

Geometry of Fear was a phrase coined by the critic Herbert Read. Describing the work of a group of young British sculptors at the Venice Biennale in 1952. The British Pavilion showcased an exhibition of the work of these sculptors, who were prominent after World War Two (in which some of the artists served on the front). Their work was characterised by twisted, spiky, battered or blasted looking human, or sometimes animal figures; and was often made in bronze or welded metal. Exploring the states of mind and emotions and the anxieties experienced after the war. 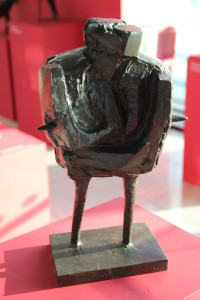 The technique of carving in stone and wood used by their elders, Moore and Hepworth, was rejected by the younger artists in favour of working in welded metal. Robert Melville, writing in Harper’s Bazaar in 1952, said that they had ‘replaced the craft of the stonemason with the craft of the blacksmith, the industrial skills of the welder’. Butler worked as a blacksmith, and in 1950 moved from hand forging to welding. Chadwick and Clarke were also adept welders, both taking welding courses at the British Oxygen Company School.

Of the work of the Geometry of Fear artists, Read wrote:

‘These new images belong to the iconography of despair, or of defiance; and the more innocent the artist, the more effectively he transmits the collective guilt. Here are images of flight, or ragged claws “scuttling across the floors of silent seas”, of excoriated flesh, frustrated sex, the geometry of fear.’

The quotation within Read’s text is from T.S. Eliot’s poem, Prufrock. Read’s image of ‘ragged claws “scuttling” may have referred to Meadows’s Black Crab sculpture of 1952. Meadows himself described his interest in representing the ‘ambiguity and tragedy of the human condition’.
More information can be found at: