Your are in: Home / News / Rock Against Racism: Online Exhibition

Our galleries may be closed but you can now enjoy an online version of our Rock Against Racism exhibition by clicking here. 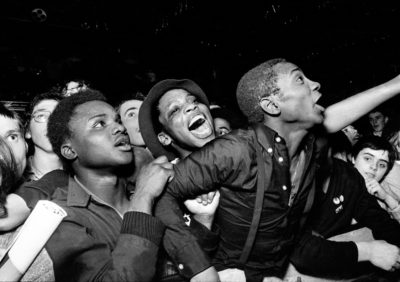 During the late 1970s and early 1980s, the Rock Against Racism (RAR) movement confronted racist ideology in the streets, parks and town halls of Britain.

Under the slogan ‘Love Music, Hate Racism’, it showcased reggae and punk bands on the same stage, attracting huge audiences. Shelton photographed performers such as The Clash, Elvis Costello, The Au Pairs and The Specials.

Here, Syd Shelton captured some of the fans through his camera lens.

”After the success of the big Rock Against Racism carnivals in London and Manchester in 1978, we’d decided we wanted to do a sort of roadshow. ‘The Militant Entertainment Tour’ took bands all around the country to different venues. The West Renton Pavilion was the third gig on the tour with The Ruts, The Gang of Four and Misty in Roots.”

”I had no idea where Cromer was, but I’d volunteered to drive one of the vans from London. It was an old VW Kombi filled with copies of our magazine, Temporary Hoarding, camera gear, lights and a load of other equipment. When we arrived all we could see was a massive shed near the beach – no people, no queue for tickets. We thought we’d arrived at the end of the earth and that this was going to be the party which no one turned up to.”

”The bands started to arrive, we set up the PA and they did their sound checks but still there were no punters. Then suddenly it was like the cavalry had arrived – a fleet of double-decker buses came round the headland with the entire audience.’ 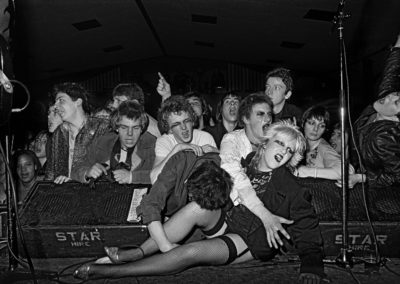 ”It was during the Ruts set, when I saw this girl in fishnets climb up on to the stage and take up a reclining pose between two monitors. It was one of those adrenaline-driven moments when nothing matters apart from getting the shot. So I climbed over everyone’s heads and dragged myself on to the stage in front of the Ruts lead singer, Malcolm Owen. I had my two Nikons around my neck and a big old flash gun and it just went pop.”

”A second later I was in the air and then on my back in the middle of the audience. The bouncer had thrown me off the stage. I still have those cameras and one of them has a big dent from that night. I remember the long drive back to London thinking about that shot and I went straight to the darkroom to process the film.”

”Recently the New York Times ran a review of the Autograph ABP touring exhibition, ‘Syd Shelton: Rock Against Racism’ and one of the images they used was the West Runton shot. A New Yorker saw the review and was convinced that the only black person in the image was his sister so he contacted her and she confirmed that it is her – she is Alissandra Cummings and is director of the National Museum of Barbados.”