Your are in: Home / OMA / Revealing forgotten secrets 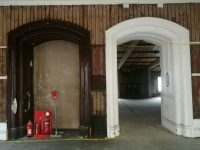 Work has continued to strip away decades of modern additions to the old Library & Art Gallery on Union Street. After several weeks the building is now back to its original fabric and long-hidden features have been revealed. These include reopening the lightwell down to the first floor as well as removing the old lift shaft from the building.

The soft strip works has unearthed hitherto hidden gems such as timber panels and doors, moulded plaster arches and Terrazzo floors that were hidden under tiles and carpets. The local contractors on this stage of the job were D. Hughes Demolition. They’ve been delicate where they needed to be, done their utmost to preserve ornate fixtures and unearthed some hidden gems. 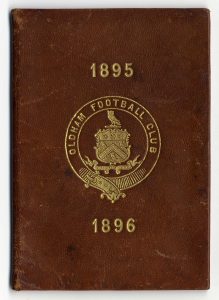 One fascinating item discovered by the contractors was an old Oldham Rugby season ticket which has now been added to the Gallery Oldham collections. The ticket dates from 1895 which was the very first season of Rugby League.  Oldham was one of the founder members of the Northern Rugby Football Union (later renamed the Rugby Football League) and finished in fourth place in this historic season.We might never know if the original owner lost it back then but it is clear that it had been misplaced for many years. 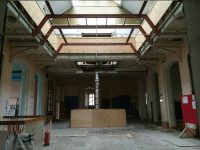 Now that the building is quieter and stripped of its clutter the next stage is to carry out several more building surveys. These will ensure that plans can be developed for the next phase of works which will transform this much loved old building into a modern facility for future generations to enjoy. These are exciting times – watch this space for more news!