Your are in: Home / Blog / Remember When? The Mighty Mannequin

Remember When? The Mighty Mannequin

In this weeks Remember When? we look back at celebrity, Joan Rhodes. 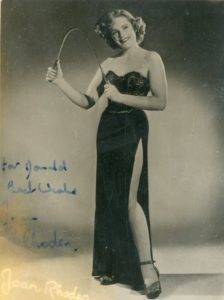 Oldham Local Studies and Archives holds many amazing stories about remarkable people. None more so than that of Miss Joan Rhodes.

Born in London in 1921 Joan went on to be a performer, wrestler, stuntwoman, strongwoman and appeared in films from the 1940s to the 1980s. Nicknamed ‘The Mighty Mannequin’ she was known as ‘the strong lady of variety’. Her strength was teamed with her beauty and glamour making her a sensation.  She toured her act around Britain as well as all over the world.

In April 1950 she appeared at the Theatre Royal, Oldham in a show titled ‘Wonders of the World. In her act she bent nails and iron bars and ripped telephone directories in half. One of her admirers from Oldham wrote a fan letter to Joan relaying how he had hurt his hand trying the feat of bending nails.  In her reply Joan gives him tips to help with his recovery and on how to attempt the trick in the future and included this signed photograph.