Your are in: Home / News / Remember When? The Albion

Remember When? The Albion 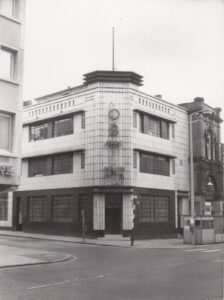 Every Monday, join us as we delve into the Archive to bring to light a piece of Oldham’s past.  In this weeks Remember When? we take a look at the Albion.

This photograph of the Albion, 1-3 High Street, Oldham was taken sometime in the 1960s. There has probably been a public house on the site since at least 1736.

By 1850 William Boothby from Cheshire was running the Albion and under his guidance the brewing side of the business became well established. In 1867 he leased an old hat factory in Coldhurst, Oldham which he turned into a brewery, calling it the Albion Brewery. With the success of his brewing business he bought several licensed premises in the town.

On 23 May 1869 a cornice fell from the Albion killing a police sergeant called Jackson and his son. Following this incident William Boothby gave up his license of the Albion and sold his brewery to a group of businessmen who formed Oldham Brewery Limited.

Oldham Brewery bought the Albion in about 1897 from John Hilton, who gave his name to Hilton’s Arcade. The Albion was rebuilt by Oldham Brewery in 1936 and included an electric lift to all three floors and the cellars. In the early 1970s Oldham Brewery sold off some of their pubs on prime sites in the town. The Albion was one of these and so it closed on 24 July 1972 and was subsequently demolished.

Have you got any stories to tell about your local pub’s history?