Your are in: Home / News / Painting reveals a hidden Oldham Story 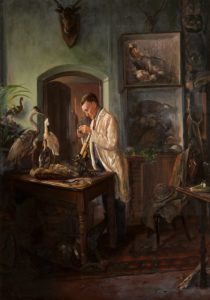 This painting The Naturalist is by the artist George Henry Wimpenny. It dates from the 1920s and has always been a great favourite with our visitors. Several years ago it inspired our natural history curator, Patricia Francis to look more deeply and investigate, the person, the place and the specimens.

The person is Fredrick J. Stubbs

Fred was born in Liverpool in 1878 and moved with his family to Oldham where he became apprenticed to an upholsterer. He joined the Oldham Natural History Society, his first love being birds. Fred volunteered at the Oldham Municipal Library, Art Gallery and Museum which was long connected with the Natural History Society. When a vacancy arose at Stepney Museum’s Nature Study Centre, he was successful in getting the job and in 1909 left Oldham for London. Completing the booklet, ‘The Birds of Oldham’ in 1910.

The Place is in the old Library, Museum and Art Gallery 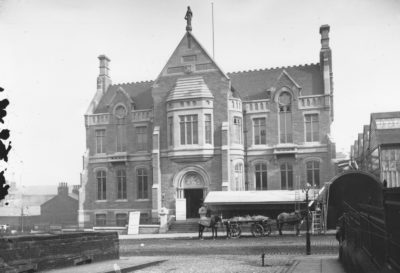 This is the building opened in 1883 which many, many years later was connected to Gallery Oldham by the bridge link from the second floor. 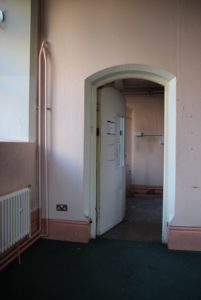 A wander through this splendid old building reveals handsome arched doorways are used throughout. Using the painting I eventually traced the actual doorway and window, which is not in the painting, but light from it bathes Fred’s microscope and specimens.

The Animals depicted – well they are still in the Museum!

So this fascinating painting depicts a real person, place and objects. It also shows beautifully how our historic collections complement each other. The original 1883 building expected to reopen to visitors as OMA, in 2021.