Your are in: Home / Blog / In The Name Of.. featured artist Rick Reddyoff

In The Name Of.. featured artist Rick Reddyoff

In the Name Of…. My Obsession with Names and
How it became a photo series

‘What’s in a name? A rose by any other would smell as sweet.’

So wrote Shakespeare in some play or other. And you have to admit, he has a point. What exactly is in a name? Of course, what he’s really asking is: ‘what sway does it hold over us, and are we bound to act according to what our name and family deems acceptable?’ Does it affect what we like to eat for dinner, or the way we choose to dress? Of course not. But names do have power, of a sort. Let’s
look at this further. 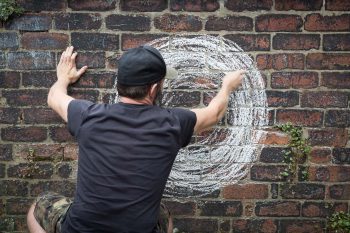 ‘I read in a book once that a rose by any other name would smell as sweet, but I’ve never been able to believe it. I don’t believe a rose WOULD be as nice if it was called a thistle or a skunk cabbage.’

We have L.M. Montgomery to thank for that second quote and I have to say I’m firmly in L.M.’s camp. What’s being said isn’t that a rose would suddenly smell revolting if it were called a skunk cabbage, just that it wouldn’t be ‘as nice’, in other words, names do have an effect (albeit not a profound one) based on the implied characteristics of those words. Of course, if we’d grown up with a rose always being called a ‘skunk cabbage’ we wouldn’t know any different and it would smell
exactly as it does to us now. We’d think of it as ‘that flower with the horrible name that actually smells wonderful.’ But if, in a blindfolded experiment, we were presented with the scent of a rose and told in advance that it was from a plant called a skunk cabbage, would we think it smelled less sweet? I believe so. Our associations with the words ‘skunk’ and ‘cabbage’ are giving us expectations based around our understanding of what they mean; an undesirable scent. Our brains are playing tricks on us.

I’ve recently been thinking a lot about names. You never seem to meet somebody who doesn’t suit their name – or even the supposed ‘meaning’ behind the name. I don’t necessarily believe that people begin to ‘fit’ their name, or that it has a measurable effect on personality, but maybe names that have harder or softer sounds have a subliminal influence on our characters. For those of us with more exotic names, perhaps the act of bullying in early life has the effect of ‘toughening us up’. I wonder if either Dweezil Zappa (son of the late, great Frank) or Zowie Bowie (now Duncan Jones, filmfans) had a rough time at school.

Not only that, but I began to consider the usage of names, specifically those invented within literature and cinema and how they definitely tell us something about the character and their motivations, or even define their actions. For example; Travis (‘traveller’) Bickle in the movie Taxi Driver, is a loner and wanderer. And in The Truman Show, Truman Burbank is the only ‘true man’ in the film, with Burbank being the suburb of California where many TV shows are made (which also suggests that his life has been faked for TV).

Before you start thinking that I’m talking a load of nonsense, I should mention that we can actually measure what effect names have on our psyche. For example, there is strong evidence to suggest that people donate more to the disaster relief for hurricanes and storms that bear the same first letter as their forename. So we can expect the relief fund for Storm Irma to have a higher proportion of donations from Ians and Iris’s than they would receive if, say, the storm had been called Geoffrey. And if Storm Geoffrey ever becomes a reality, we’ll surely see lots of Gordons and Gertrudes dipping into their wallets to help out.

It has even been mentioned that naming storms with the most popular letter of first names might actually generate more financial support for disaster relief. The US National Hurricane Centre’s naming conventions prohibit the use of storm names beginning with the letters Q, U, X, Y & Z (presumably due to a lack of names beginning with these letters). So that’s good news for the potential victims of storm Zoltan.

Other research suggests that those people with shorter, easier to remember names are much more likely to succeed in business.

So we can probably agree not only that names do have an importance and meaning, but also that they have significant implications in the wider world. Then again, articles like this one in The New Yorker pours cold water on these studies and hints that they are inherently flawed. But we all know that our names have meaning for us. As an example; we very readily recognise our own name being called from across a crowded room even though it might not be directed our way. Our ears prick up and our head turns automatically to the speaker; it cuts through the background noise because we’re so attuned to listening for it. Whether you believe that names have an impact or not, something is happening and in terms of the way we identify ourselves, it’s a significant something.

Where am I going with this and why am I so interested in the topic?

I recently came across the opportunity to explore the usage of my own name and specifically what it means in other languages. A couple of months ago I was composing an email to somebody in Italy. I decided to be polite and use Google Translate so that I could send the message in Italian. I know that Google Translate isn’t perfect, so I decided – despite not speaking the language – to proof-read the resulting text just to make sure that it appeared broadly correct. When I reached the end of the document, I realised that I had left my name Rick in the sign-off at the end and this too had been translated; to pagliaio. With my curiosity peaked by this unfamiliar word, I reversed it through Google and found that it meant haystack. I forgot about this for a few weeks until I found myself translating another message into French. This time Rick had become
meule which meant grinding wheel. The germ of an idea formed. I was hooked and I began to explore what my name translated to in every language available in Google, all 90 of them, until I had a database of words to work from.

My full name is Richard Alexander Reddyoff (Rick for short), so I translated each name to see what came out. In most cases, Rick was the only name that had a result, except for Arabic which translated Richard as Palestine and Khmer which decided that Richard, Rick and Alexander all deserved to have the prefix lok added to them; so lok Richard, lok Alexander. Translation: Mr Richard, Mr Alexander. Khmer is obviously a very polite language.

On the whole, they came out with agricultural references, or spoke of sprains and strains, which I attribute to these dictionary sources:

noun
noun: rick; plural noun: ricks
a slight sprain or strain, especially in a person’s neck or back.

Now I had a list. I’m a photographer, so obviously (and in the spirit of the experiment) I had to ‘translate’ these into images. For years, I have been a fan of the American photographer and filmmaker Jem Cohen. In his film Lost Book Found, a seemingly unconnected string of words (the ‘voice’ of the titular book) is set to filmed images that bear a loose resemblance to the dialogue being spoken. Clearly this was the way to move forward, so I set about creating a group of pictures with an indirect link to the resultant word. Thus, meule – or grinding wheel – becomes an image where I draw a circle with a piece of chalk: the abrasive act of drawing with the chalk becomes grinding, the circle is the wheel. Just as your brain might make you think a ‘skunk flower’ wouldn’t smell as sweet as a rose (even if it’s the same thing), my creative process made me turn the meaning of a grinding wheel into something similar, but not the same. I’m changing the expectation of what the title means into an altogether different creature.

In my images, my name has undergone a translation not once, not twice, but four times; first into another language, then back into English, then into an interpretation of the word and finally into another medium altogether: the photograph itself. It loses a little information with each translation, but also gains layers and extra meaning. What am I learning from this? When I started, I didn’t even know that ‘rick’ in English meant a sprain or strain. How this passed me by, I’ll never know, but I’ve since heard people using this in regular conversation and even once used to describe a mistake (something at which I’ll admit I initially took a slight offence). So the act of creating these images has made me think more closely about not only identity, but the usage of speech itself and, as I
delve deeper into the meaning of words, I’m gaining a deeper appreciation of the complexity of language, their shared origins and the threads that connect them.

A couple of weeks after embarking on this project, I was given the perfect title for the series. Sat in the sunshine one weekend afternoon, I received a random text message from an unknown number. It said only: A może coś takiego?

Putting this through Google Translate, I discovered that it is Polish and means: ‘or maybe something like that?’

Which, given that the whole project revolves around approximate translations, seems incredibly appropriate, don’t you think?

You can see the first of my series Or Maybe Something Like That on display as part of the Oldham
Open exhibition until November 17th. It’s called ‘Cloak’ and comes from a translation of my name into Croatian and back again.