Your are in: Home / News / Object In Focus: Rothwell Car

One of the most popular items in our collections was first unveiled this time last year. The Rothwell Car made its debut as part of the Oldham Accelerate Festival. 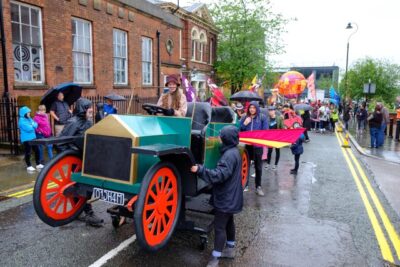 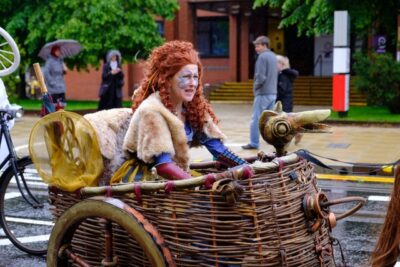 The real car took pride of place in the Gallery Oldham foyer whilst a fantastic winged version was paraded through the town. Although the Accelerate Festival cannot take place this year it will return to Oldham in 2021. 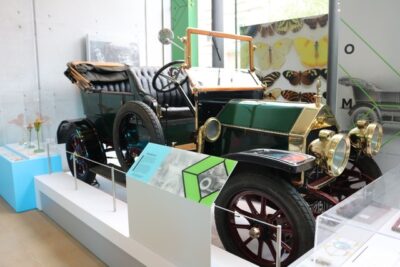 The car was made in Oldham in 1910 by the Eclipse Machine Company. The firm used ‘Eclipses All Others’ as their slogan. The car has a 20 horse power, four-litre engine with a top speed of 50mph. It was donated to us in good working order by a member of the Rothwell family who had restored the vehicle as a labour of love.

Brothers Tom and Fred Rothwell began by manufacturing sewing and knitting machines in the 1880s. The factory was in Viscount Street, off Rochdale Road. Later the firm progressed to cycles, then added motorcycles, and from 1901 they also made cars. The firm closed down in 1920, having made a total of between 500 and 600 vehicles. Today this Rothwell car is the only one known to survive. 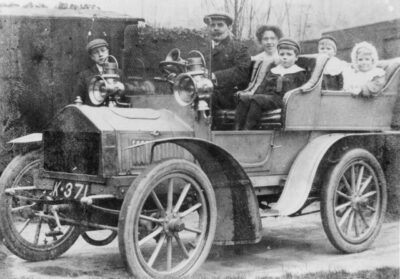 The car was made in 1910 and five of the castings under the bonnet are stamped July 1910.  It may have taken several more months before the car left the factory as the car was only registered in May 1911. It was given the registration number CP215 by the County Borough of Halifax where its first owner lived. He was William Greenwood of Parkinson Lane, Halifax. Greenwood was a self-employed grocer who had already bought a Rothwell van, CP178, in the previous year.

In 1920 the government introduced a new Roads Act which increased the costs of owning a car. This was supposed to pay for road improvements that were needed after years of neglect during the First World War. William Greenwood was 60 at the time and reacted to this new tax by taking his car off the road and storing it in a garage for the rest of his life. This act was vital to preserving the car for future generations as when the car was next sold it was already a vintage vehicle and only of interest to collectors.

The most recent restoration project brought together many long lost cousins as the Rothwell Car hit the road for one last series of journeys. The generous donation to Gallery Oldham endures that it can be enjoyed by future generations of Oldhamers. Make sure you call in and see it in our foyer when the Gallery reopens.