Your are in: Home / OMA / Journey back to magnificence

Journey back to magnificence

It has been a busy and satisfying year of progress on our Heritage & Arts Centre project. As we reach the end of 2017 it is time to draw breath and take stock of all the achievements we have made so far. And also to look forward to what happens next. The old library and art gallery is on a long journey back to magnificence and exciting times lie ahead!

The construction works continue to reveal some of the hidden secrets of the old building. Thanks to the strip out of modern features a fascinating range of blocked archways, old staircases and trap doors have been uncovered. 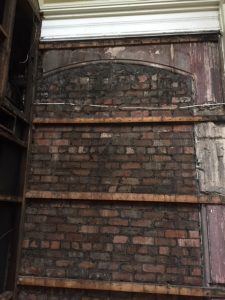 We sometimes forget that the building was constructed in two stages. The majority of the building dates to 1883 but the library, museum and art gallery was so popular that an extension was added just a few years later. It seems that this gave the curators a chance to suggest a few ‘improvements’ such as blocking up windows and archways to allow for more paintings to be displayed. We think that the rediscovered trap door was a picture hoist to bring paintings up through a building which still did not have a public lift.

Much later in the building’s history another ‘improvement’ was made. This involved cutting the original double height lecture theatre in half by installing a new floor and creating a basement. The restoration of this lecture theatre is one of the exciting features of the heritage project. And so over the last month the modern floor has been broken up and slowly removed as these two pictures show… 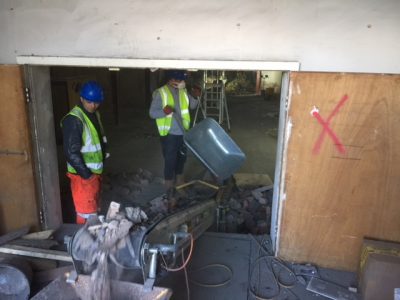 This modern floor slab was painstakingly broken out whilst preserving all heritage fixtures). Along with the supporting steels these tonnes of spoil have now left the building. 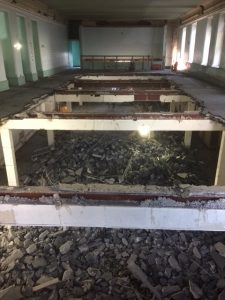 A great deal of original features have been documented, tagged, wrapped and taken into safe storage. This includes parquet flooring, several doors and even the tongue & groove boarding that originally lined the second floor gallery spaces. Their refurbishment will begin next year.

Beyond the construction work we have also continued to plan and design the exhibitions that visitors will see in the new Heritage & Arts Centre. We’ve worked with local groups and individuals to ensure that we tell the stories that you want to hear. There will be more activity next year as we continue to reach out and work on our plans. We look forward to sharing them with you in 2018. 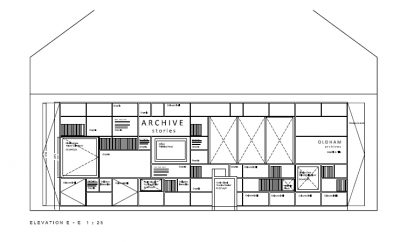