Your are in: Home / News / Can you help find a missing Peterloo banner?

Can you help find a missing Peterloo banner? 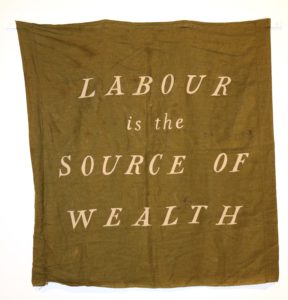 Staff at Gallery Oldham are asking everyone to dig around in their attic, dust down objects in their shed and rummage through their cupboards and join us in the hunt for a lost Peterloo banner.

This year marks 200 years since people from all over Greater Manchester and Lancashire marched into Manchester to protest for the right to vote. Over 60,000 men, women and children walked to St. Peter’s Field to listen to Henry Hunt speak about parliamentary reform. Each group brought with them a banner, lovingly handmade from any spare cloth or silk that they could find. The banners were painted with slogans and would have made an eye-catching display held up high and accompanied by bands of music. These banners were a symbol of pride amongst the different neighbouring towns and villages. They also helped people know who to follow after the meeting, in such a huge crowd of people this was very important, as it would have been easy to get lost. The banners acted like colourful umbrellas often used by tour guides today.

Currently there is only one surviving banner from the Peterloo Massacre which is on display at Touchstones Rochdale. Many were destroyed by the authorities during the massacre as they were seen as symbols of protest. Accounts tell of the soldiers targeting the people carrying banners shouting, ‘Have at their flags!’ as banners were viewed as trophies by the cavalry.

Intriguingly, in his 1921 book Three Accounts of Peterloo, Francis Bruton wrote that there was another surviving banner; one from Chadderton. This banner had been displayed in the old school at Healds Green for many years but its owner had then moved to Blackpool and its whereabouts became unknown. As part of the Peterloo Bicentenary, Gallery Oldham is on a mission is to track this banner down. Do you have a relative who moved to Blackpool in the early 1920s? Do you have any family ties to Peterloo? If you do and you think you might know where the missing banner is make sure you get in touch with the Gallery.

The Chadderton Flag was made of green and white silk. It’s about 3.5m long by 2.5m wide and bore the words Chadderton Political Union, United we stand, Divided we fall, No Corn Laws, Universal Suffrage, Vote by Ballot and Labour the Source of wealth. On the reverse side was a pair of clasped hands.

Sean Baggaley, Senior Curator at Gallery Oldham, said ‘The banner may be nothing much to look at after 200 years. It might be faded, rolled up and perhaps even torn and moth eaten. But it has irreplaceable historic importance. To find this banner would be utterly amazing and we really hope to track down its whereabouts.’

Don’t miss the From Waterloo to Peterloo exhibition on display at Gallery Oldham until 21 September.