Your are in: Home / News / Happy Global Recycling day!

At Gallery Oldham we don’t just recycle we up-cycle! Our Social History Curator, Bill Longshaw, is currently rationalising the collection. This means taking a detailed look at what we have in the collection. He has found several objects that are no longer appropriate for use in the Gallery, or other museums, but instead of just getting rid of them we’re giving them to artists who are turning them into art!

Richard Dawson, a visual artist at Woodend Studios, took some of our old vacuum cleaners and he’s hoping to find a project they fit into, possibly turning them into standing lamps! But Richard believes that the ‘objects will tell me that they’re part of the project’ so we won’t know for certain what he’ll create until inspiration strikes. Richard first got involved with Gallery Oldham by attending our quarterly Cultural Forums. He has gone on to create multiple works of art for the gallery that centre around a loss of bio-diversity, the environment and functionality.

Richard acknowledges that sometimes issues about the environment can feel so overwhelming because the environment is so big but this is why he feels that ‘up-skilling’ people is a great way to cope with these issues. Learning how to up-cycle the objects you have around you is a fun way to help the environment.

‘Anyone can do it. Part of the human condition is imagination and creativity, it’s all about having a positive attitude and not caring about the outcome. Just go for it. You don’t need a workshop full of tools, it’s as simple as making origami out of paper you were going to throw away’.

His current project is making an artistic interpretation of the Enigma machine using two 1940’s and 1950’s typewriters that he found after they had been thrown away. The machine will be sent to schools around Greater Manchester to help students engage with history. 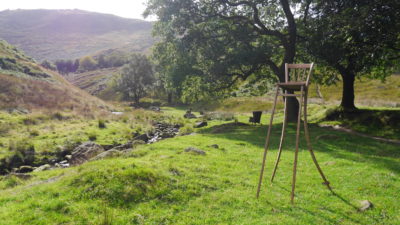 Sketch for a chair for a giraffe by Richard Dawson.

So, why not take inspiration from Richard and try your hand at up-cycling and see what you can create with what you have around you!

Take a look at some of Richard’s other artwork, visit his website.