It has been a trying season for Oldham Athletic supporters and just when things couldn’t get much worse, the season was suspended and suddenly there was no football at all… 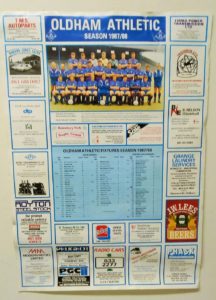 It is nice to look back on happier times. This fixture poster is a recent donation to Gallery Oldham. It came from a long-abandoned corner shop, just across the road from Boundary Park. It lists the fixtures for the 1987-88 Division 2 season; a time when the Latics were on the up. In 1987 the team, managed by Joe Royal, narrowly missed automatic promotion to the top flight, before losing out to Leeds United in the inaugural play-offs. So, hopes must have been high when the season kicked off against West Bromwich Albion in August. The team could boast the likes of Mike Milligan, Denis Irwin, Tony Henry and Andy Richie, but perhaps surprisingly finished the season in 10th place. Especially considering that Richie and striking partner Roger Palmer notched-up 20 goals each that season.

Some cynics have sited the artificial pitch, installed in the 1980s, as a reason for Oldham’s success. However, this should not overshadow the talented squad that Royle assembled. Club legend Richie banged in 28 goals in the 1991-92 season. The club finished 8th while reaching FA and League Cup semi-finals and more glory was to come. The following season they won the Second Division and promotion to the newly-formed premier league. A League Cup final and another FA Cup semi followed, before the long decline set in. 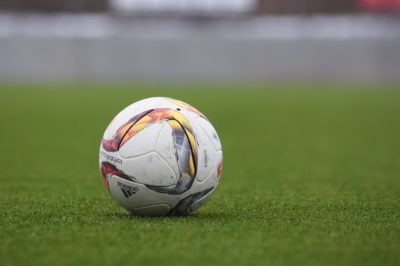 The poster is adorned with adverts for small local firms, offering everything from taxis to keep-fit equipment. In these troubled times we should spare a thought for small business and keep our fingers crossed that both they and the Latics can begin afresh in the days to come.