Your are in: Home / News / Flying the New Union Flag

On Friday 14 July we are hosting a fantastic touring art installation. The New Union Flag project by the artist Gil Mualem-Doron aims to reimagine the Union Jack and acknowledge and celebrate the communities that contributed to the UK’s cultural legacy. Re-created with fabric designs from all over the world the New Union Flag transforms the traditional Union Jack from an archetype of uniformity – to a dynamic and celebrated on-going performance of diversity. 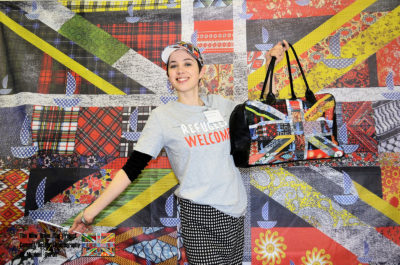 The project began in 2015 and has already engaged thousands of people at exhibitions, cultural events, festivals, community gathering  and rallies. In March 2017 the project was part of @WhoWeAre_2017, at Tate Modern and we are pleased to now welcome the New Union Flag to Oldham.Visitors to the gallery on Friday will see the New Union Flag and get the chance to make their own flag with the artist. You can find out even more about the project by visiting Gil’s website The New Union Flag has been generously supported by Arts Council England.