Your are in: Home / News / Fishing for Family History

Fishing for her family history, Angela Dingle’s visit to Gallery Oldham brought her face to face with a picture of her great-great grandfather, William Barber.

Angela’s relative was quite a character. Born in 1829, he worked as a fisherman in St Ives. He lived in Pudding Bag Lane in poverty with his wife and their many children. The street where they lived was later demolished because of overcrowding and unsanitary living conditions. William had fewer opportunities than most as he was blind in his left eye. It is a mark of his strength of character that he survived as a fisherman, a hazardous career even for the able-bodied. For over twenty years, whatever the weather, he provided a life line to the Godrevy lighthouse men ferrying them food and supplies.

Speaking in verses was a family tradition and William would address his wife in sonnet form. William also loved to make dolls for the local children out of old oars. In the 1880s, the artist-photographer John Douglas captured William in Pudding Bag Lane carving some of his dolls. 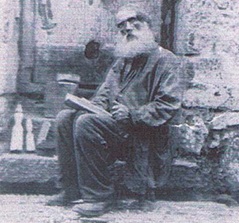 In his later years William became something of a local celebrity. As the railways opened up access to St Ives, artists arrived drawn by its unique light. After overcoming initial suspicions about the newcomers, the fishermen were pleased to sit for the artists to earn some extra money. Then in his late sixties, William was in demand because of his almost biblical appearance.

William is described as a ’typical weather-beaten old boy’ with a ‘shaggy beard.’ Accounts from the artists who painted him suggest that he had a store of interesting facts but that they were perhaps keener to paint him than listen to them. Indeed one of William’s relatives writes that some of his comments on their artwork would be ‘unprintable’.

William Titcomb, was one of the artists who painted William; his work Jubilee Day is in Gallery Oldham’s collection. The painting records the celebrations in St Ives in June 1897 to mark the 60th anniversary of Queen Victoria’s accession. 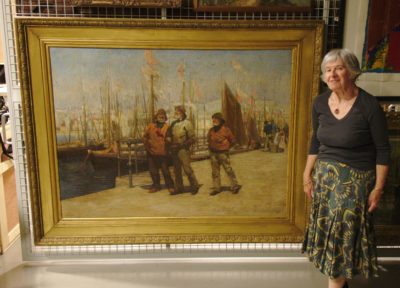 In the painting William is shown as the confident central figure. Used to seeing the somewhat gaunt figure in Douglas’s photograph, Angela was surprise by the painting which revealed much of the character and physique mentioned by William’s contemporaries. Folliott Stokes who wrote in From St Ives to Land’s End described Will was ‘a man of fine physique, with the face and brow of an old prophet’.

There is another painting of William by Titcomb in Nottingham Castle Museum. Angela is still searching for more paintings of her great-great grandfather and is determined to track down images of him painted by other artists.

Are you interested in tracing your family tree? Discover your family’s unique history at Oldham Local Studies and Archives.

We have a huge collection of records to help your search – including census returns, parish registers, newspapers, maps and photographs. Free access to family history websites is also available. We also run regular courses and advice sessions, and our friendly staff are always here to help you. Call in to find out more at Oldham Local Studies and Archives, 84 Union Street, Oldham, OL1 1DN, visit www.oldham.gov.uk and search family history or email us at archives@oldham.gov.uk