Your are in: Home / Blog / In Fine Style – our latest exhibition

In Fine Style – our latest exhibition

In Fine Style: The Dancehall Art of Wilfred Limonious

We have just finished installing the latest exhibition in our foyer. This fascinating display explores the life and work of prolific Jamaican illustrator, Wilfred Limonious (1949–99) 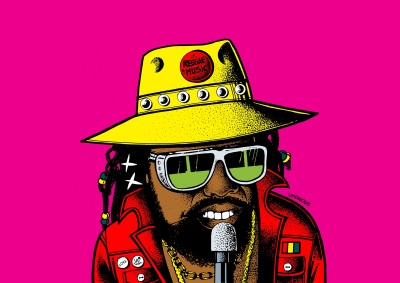 This touring retrospective has been put together by One Love Books and the exhibition includes reproductions of work from the early 1970s through to the mid-1990s. It spans three key phases in Limonious’ career: his newspaper comic strips, his illustrations for the publications of the Jamaican Movement for the Advancement of Literacy (JAMAL) and his distinctive artwork for the burgeoning dancehall scene coming out of 1980s Jamaica. The exhibition has been developed alongside a coffee-table book exploring Limonious’ life and work, due for release in August 2016.

Wilfred Limonious began his career producing comic strips for the Jamaican daily newspaper, The Star, with cartoon characters such as Amos and Chicken becoming particularly popular. During the 1970s he worked as in-house illustrator for Jamaica’s national literacy programme, jamal (Jamaican Movement for the Advancement of Literacy), before going on to produce a large body of work for the Jamaican music industry, illustrating hundreds of LP jackets and record centres for labels such as Jammy’s, Power House, Studio One, Techniques, Ujama and Midnight Rock. Despite being widely recognised among reggae and dancehall circles, Limonious’ illustrations are relatively unknown in the wider art world.

Exhibition curator, Al ‘Fingers’ Newman, describes the role that the exhibition plays in remembering Limonious’ legacy: Wilfred Limonious is an important part of Jamaica’s cartooning tradition, and the father of what has become known as “dancehall art”. His seminal work, particularly for the island’s music industry, continues to be relevant today and deserves far wider recognition.

The exhibition is open until Saturday 7th May. Catch it while you can!