Your are in: Home / Blog / Discovering a long forgotten keepsake 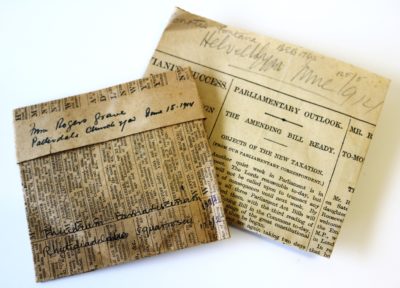 Samples of mosses collected by William Mackie from the grave of Thomas Rogers and Helvellyn where his friend died whilst climbing.

Today, 30 May, marks 118 years since the Manchester botanist Thomas Rogers died whilst climbing Helvellyn in the Lake District in 1901.

Our natural history curator recently found these fascinating specimens with a poignant story to tell, in our store. They were collected by Oldham botanist William Mackie. These tiny specimens are wrapped in newspaper envelopes made one from the Times dated Monday 15 June 1914 and one from the Manchester Guardian.

The handwriting informs us that Mackie visited Rogers’ grave in Patterdale in June 1914 where he collected these two specimens of common mosses – Thuidium tamariscinum and Rhytidiadelphus squarrosus.

Full in the face of Heaven, upon these hills he died, Nature’s true lover; of his kind beloved as loving, lulled by the moorland rills and by the sighing mountains wind, he soundly sleeps; No fitter place were found for him to rest upon our English ground.

On the same trip William Mackie also collected another moss actually from Helvellyn itself. This was left unidentified until 1985, some 71 years later, when Bess Bescoby, member of the Oldham Microscopical and Natural History Society identified it as Philonotis fontana.

Rogers and Mackie were great friends who collaborated and corresponded on many botanical topics.

Moss collected from Helvellyn in the Lake District where botanist Thomas Rogers died.