Your are in: Home / Blog / Abraham and Elizabeth Stott by Alison Jones

In this series of blog posts research volunteer Alison Jones uncovers the life of William Stott of Oldham, from his early childhood through to his artistic career follow Alison’s journey.

Abraham Stott made his living as a dyer and cotton waste dealer before he became a mill owner. Cotton waste dealing was established by small operations in the Mumps and Bottom of The Moor area. The cotton industry at the start of the 1850s was booming, but then went into  decline from 1854 until the Indian Mutiny led to a steep decline in 1857.  Then came recovery, which was halted by the American Civil War . By 1862 the Cotton famine was at its height and a quarter of the population of Oldham was, on relief . The worst of the famine was over by 1863.  Cotton waste dealers may have done well out of the cotton famine. 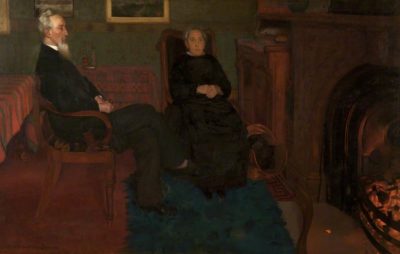 In 1841 Abraham Stott was 20 and was living with his sister Elizabeth Stott who was 15 at Croft Bank, Lees Road, Oldham above Town. Their neighbours included a greengrocer, innkeeper, milliner and lots of cotton spinners. This was an area of rapid growth of poor quality, cramped housing and unplanned industrial development.

In 1851 Abraham Stott and Elizabeth Stott and their 3 children, Samuel, Robert and James, born in 1851, were living  at the Waterloo end of Rhodes Bank. His sister Elizabeth, now aged 26, was still living with them, and she was a cotton reeler.  Abraham Liebig Stott was born in 1853 on the 19th of June. In that same year Robert Robinson Fullerton Stott died on the 31st of August, he was buried at St James.
John Robert Stott was born at Rhodes Bank in 1855 .

The Stott’s neighbours at Rhodes Bank were varied and included labourers and mill workers. There were many people from Ireland, and one property listed 17 occupants, mainly agricultural labourers.   The colliery had opened in 1841 and the railway was extended to Mumps in 1847.    Mumps Brook and Sheepwashes would have added to an unpleasant environment.