Your are in: Home / Blog / A strange arrival at Gallery Oldham…

A strange arrival at Gallery Oldham…

How long have you and Louise worked together as the Spacecadets?

Ages, its flown by! We became business partners in 2008 but we were working together for at least 3 years before that.

Do either of you make art individually as well?

I do when I find time which is scarce. Me and a friend I went to art school with have just started sending each other daily drawing prompts to force us into trying out new stuff, it’s easy not to make the time when your life is so full already. I can get quite miserable if I’m not making or being creative so I’m trying to make it a priority.  Often with Spacecadets we are making to someone else’s brief and although we definitely squeeze our own stuff in there it can still sometimes feel limiting so it feels important to make time for your own personal stuff as well. 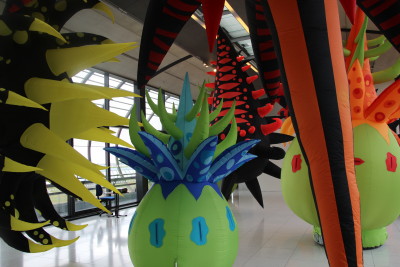 What has been the favourite thing you have made?

There’s loads – I love the Indian elephant which was commissioned by Manchester Indian association for the Diwali festival, it has a really beautiful slow graceful way of moving, also the lotus flower we made for them which opens and closes, it’ hypnotic to watch, really mesmerising. I really love an exhibition we have touring at the moment called Blood and Bone which part of the generation project. We used a lot of heavy red velvet against the white ripstop – it works really well and looks quite dramatic and it was great to be using a different fabric. The exhibition is a collection of organic tunnels and pods that you actually get inside to experience it. I like making work that forces you to change your behavior and look at something in a new way.

Are the wonderful flowers in this exhibition inspired by real plant life?

Yes loosely, imagined expanded plant life! Some of them were inspired by carnivorous plants and are meant to look a bit threatening as well as full-on, in your face fun. They are certainly no stranger than any real plants I’ve researched – some of them are far more bonkers – these ones are just loads bigger.

Can you tell me a bit about the making process? Do you design them in 2-d first?

I draw them first and then look at ways to make them. Sometimes we can make the patterns by eye and sometimes we need to use 3d modelling software to make the basic pattern, it depends on the complexity. It’s much easier to make regular shapes than organic ones where all the pattern pieces are the same – which means less cutting out and a much more logical process of putting them together. Irregular shapes take a lot more brain power (and a lot of meticulous labelling!) it’s easy to get stuff mixed up especially when you working at such a big scale. You also never know exactly what something is going to look like till you blow it up. Inflatables don’t always behave in the way you expect.

Obviously individuals have different reactions to your shows. Is there a particular reaction that you enjoy when people see your inflatables?

People tend to light up and its lovely to watch. There are lots of WOW’s and big eyes. I’d like to think we inspire the bigness of people’s imagination. I’d hope they’d take away a sense of that. I’d hope that we inject at least a small sense of wonder into the everydayness of daily life.

You’ve recently installed some work at Kew Gardens, can you tell me a bit about that?

We have made four giant interactive spices. Spices are so all encompassing, they engage all your senses. We wanted to create art work that did this, that made you feel like you were actually consumed by the spice – with as many of your senses engaged as possible. We have created huge giant – ginger, nutmeg, garlic and chilli. The biggest is 14m long. Each has zip holes around the outside so you can actually stick your head inside the spice and experience it from the inside. Each one has it’s own internal world, including smell. The sticking your head inside feels like making a magical discovery as there’s a whole secret installation to experience in there, not only can you discover it but you can see other people doing the same, so on the inside you can just see other faces looking in from across the spice. It’s a bit surreal. It’s been hugely popular, its on till September.

The turbine!! We love working in big spaces and it’s a treat to work indoors as we don’t have the elements to deal with which can take a lot of stress out of our work.

I’d like to make more interactive stuff and collaborate with digital artists and using technology like ardino –  things that can really help animate our work. I’d like to make a massive human heart.

Is there anything else you’d like people to know about the Spacecadets or Botanical Invasion?

You can see more of our work at: https://spacecadets.com
Get in touch if you have any ideas you want to discuss!