Your are in: Home / Blog / 3D Scanning at Gallery Oldham 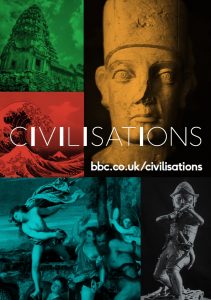 For the past couple of months we have been working on something quite exciting. By now you may have seen some of the publicity for ‘Civilisations’, the brand new series on BBC 2. Civilisations is a major 9-part series on BBC Two presented by Simon Schama, Mary Beard and David Olusoga. It celebrates the rich and diverse history of culture and society around the world, and the importance of art in our collective story.

The Civilisations festival is collaboration between the BBC, museums, galleries, libraries and archives across the UK. More than 250 organisations in England, Scotland, Wales and Northern Ireland have signed up as partners. It will highlight collections and help us understand what the term ‘civilisations’ means. 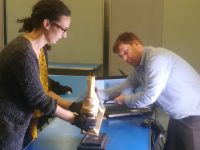 For the civilisations festival we have had two objects in Gallery Oldham’s collection 3D-scanned by the BBC team for their augmented reality app accompanying the TV series. There will be about 30 objects featured in the app from the whole of the U.K, so we are very happy to have been chosen for this ground-breaking app.

3D scanning is a process that we haven’t really experimented with before at Gallery Oldham, and we were very lucky to have the BBC Connected Studio team come to the gallery and carry this out. 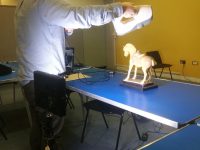 It involves some key bits of equipment including a 3D scanner, which is used to analyse the surface of an object. It records the shape and colour by using a series of points for reference. These points are then reconstructed in specialist computer software to create a digital 3D model. These models can then be edited, viewed and saved. In the Civilisations app you will be able to place these 3D models in your home, on the tram, wherever you like! They can be viewed through your phone and you will be able to explore the object as if you had it in your hands. This fun and futuristic technology is called augmented reality or AR (placing a digital feature in to the physical world). 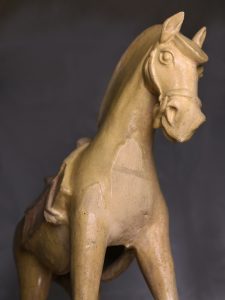 Our first object to be featured in the app is a Tang Dynasty Horse. This object was collected, and then donated to the gallery, by Francis Buckley. Buckley had a long association with Gallery Oldham. He began donating items in 1926 and regularly gave the Gallery objects until 1948, the year before he died. He had an eclectic taste, he wrote books about English glass and archaeology but was also interested in items such as watches, Chinese ceramics, buckles and love tokens. This object was unearthed in a burial site in China in the late 1800s, after building work for the railway had begun which was connecting cities and towns to nearby ports to export goods overseas. Workers uncovered the burial sites as they dug up the land, they were full of ritual and household objects. The horse’s decorative style is from the Tang dynasty and is thought to date from between the years 618 -907 AD. In Tang China, the horse was the emblem of wealth and power. Working horses from Central Asia and the Middle East were imported to China during the First Century B.C. These horses were the inspiration for a range of creative people such as artists, poets and composers. 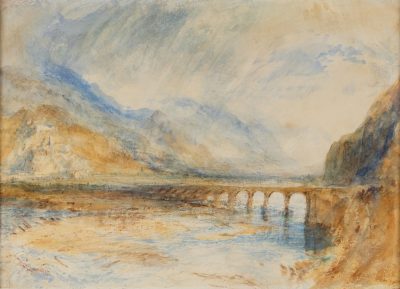 The second object is one of our fantastic watercolours by J.M.W Turner. ‘Bellinzona, The Bridge over Ticino’ was painted in around 1842. Turner is widely regarded as one of the founders of modern day European watercolour painting. His work represented a new approach to painting – watercolour had previously been used as a way of recording the world in a detailed and realistic manner. Turner worked to create the atmosphere of a scene rather than to create a true-to-life depiction, he often painted on to wet paper to soften the edges of forms and achieve subtle effects of gradation. 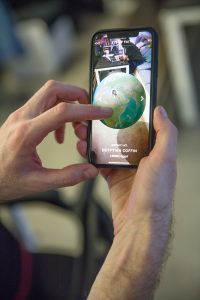 Both of these objects you can explore further through the app during the Civilisations season. If you fancy seeing them in the physical world we have a small display in the Gallery Oldham foyer until the beginning of April, where you can learn more about the objects and their stories.

We are very excited to see our objects transported in to the app, and would love to see any pictures of you with the objects!

‘Civilisations AR’ is available to download in the App Store (iOS) and the Play Store (Android).